Home/news/Ruca, Jade and Zoey shine for Coldwell Banker
Previous Next 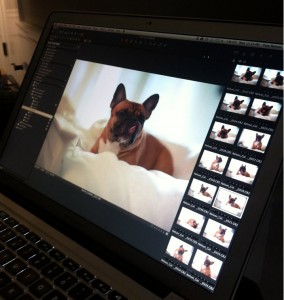 In December (yes – we are a little behind posting about our commercial projects!) we were contacted by an agency producing a commercial for Coldwell Banker and wanted to cast a number of dogs for series of vignettes showing how much the right house could add quality to a family’s life.  The agency planned to cast 3 dogs, a small dog playing with children in an interior shot, a French bulldog doing a sit or down stay on a bed and a dog chasing water from the hose outside.

For the French Bulldog – they really wanted to see A LOT of frenchies they were looking for a special something and while we always start with our students we ended up doing a large casting call, meeting with Bonnie’s big list of show contacts, phoning vets for referrals to good natured patients and generally tracking down all the Frenchies we could find. After submitting well over 2 dozen frenchies in every frenchie colour available, a fawn female, Ruca, owned by Danika Carlson was chosen. Ruca was chosen solely based on the engaging expression in her photograph – so just a reminder that having some photos of your dog that really showcase their personality can really make a difference when your dog is up for a part. (and no we aren’t trying to sell you photograph packages! Coordinators that do charge big fees for photographs usually make their money selling photographs  not working in the movie industry) 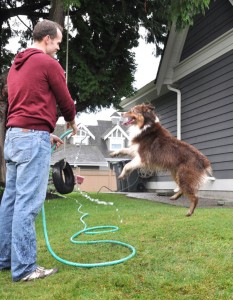 For the hose chasing dog we put a casting call out.  While many dogs are ok with playing with water, many are not or will play only when they are in the right mood or with their owner but in  his scene the dog would have to work with an actor and the scene could end up being shot over and over and over again. So we knew we needed an absolute water chasing fanatic and asked people to send us videos. Australian Shepherd, Jade, owned by Sandy Bater was chosen from a number of great submissions.

Finally Andrea Cappadouca’s Zoey was picked from our training class as they wanted a small dog with a certain level of training that was good with children.

The shooting day was a treat for Bonnie – the shots were relatively stress free and the dogs did everything they were expected too and as an added bonus Bonnie got to catch up with old friend Sandy while they waited for Jade’s shot to come up. Bonnie said she really enjoyed the waiting period with all the owners  and that there was a lot of shared laughter. 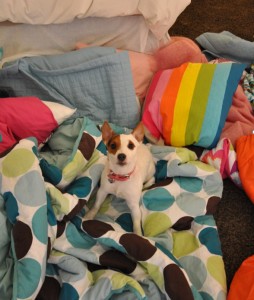 First up was Ruca – her shots were all about showing personality. She enjoyed hanging with the actor and loved the training treats. Being filmed getting a tickled under the chin – it is a dog’s life! The director loved Ruca’s expressive face.  Next, Jade blew away the Agency with the drive and enthusiasm for chasing the hose. She got serious airtime (almost did backflips!) and did it over and over again and really could care less who held the hose.  The director liked her so much they added actions including a sit stay with a head-cock. Last but not least was Zoey who got to play slumber party and jump on the bed with a bunch of small girls. She handled all the screaming and jumping like a pro unfortunately the jumping on the bed scene was cut from the final commercial. 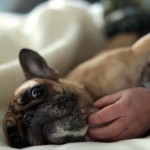 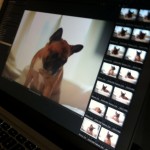 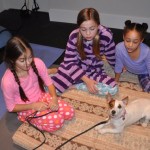 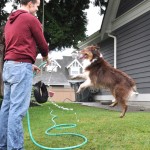 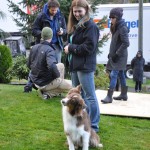