Home/news, Training/The Importance of Holding Your Dogs Attention
Previous Next

Even if you are lying on the floor! 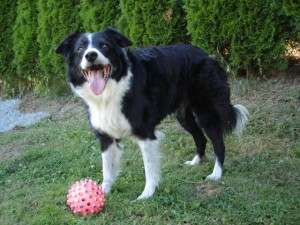 Any obedience competitor can tell you of horror stories where they lost points or even failed a trial because the dog was distracted by what was going on in the next ring, or… children running up and down the aisles or… people walking past with food or…. Working dogs on movie sets brings a whole other level of distraction and confusion for a dog to deal with. It is not unusual to have 40 people or more crowded into a small set all of which have their own agenda. Some are manoeuvring large pieces of equipment, talking into radios, carrying their lunch etc. Its busy, noisy, hot and crowded and a movie dog still has to be able to focus on the job at hand.

In standard obedience dogs are taught to give attention primarily in the heel or front positions. The dogs are used to looking up into the handlers face and focusing on the handler when heeling.  The common ingredient here is that the handler is in a standing position.  On a movie set, camera angles are the trainer’s nemesis!  You can almost guarantee that the trainer will not be a) at all close to the dog, or b) in a position the dog considers “normal”; without being seen on film (big no no!). The trainer often has to scrunch into whatever available space is left by the cameras and other equipment and if the dog isnt’ prepared, this change of trainer position could potentially throw the dog off completely. 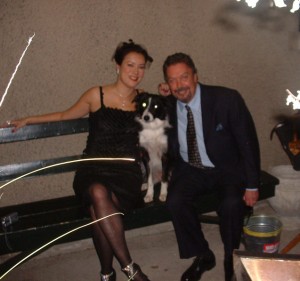 On one memorable set day shooting on the television series “Caprica” we had been told that the shot  was a simple sit stay that would involve Border Collie, Hannah sitting in front of a cardboard robot (stand in for a CGI Cylon). The actual shot involved was complex with  Hannah descending a circular staircase with the lead actress, making several stopping points across the main set and finally leaving the actress to cross the room alone and sit in front of the cardboard robot. To make things even more interesting they were shooting the scene with no less than 3 cameras all from different points on the set.  This meant that one of our trainers was tucked up near the ceiling at the top of the staircase to give Hannah the “go with” command to start the sequence and our other trainer was squished under the pool table in the middle of the room laying flat on his belly.  Luckily Hannah who was a veteran of several movies and commercials was an old hand at paying attention even when the trainer was belly down on the floor. 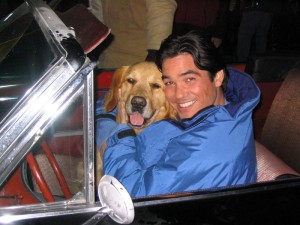 Another shot that comes to mind is from the movie Bailey’s Billions. The shot was an interior car scene. In these shots the camera films through the front windshield. The car itself is on a trailer pulled by truck so the actor only has to act like they are driving.  In this shot, Head Trainer, Bonnie was stuffed into the footspace for the passenger seat. This was a particularly difficult position for working a dog as dogs do not naturally respond easily to commands given from someone physically below them (try it with your own dog and see how they respond).  Add in the additional distraction of Actor, Dean Cain who was talking to the dog in shot and there was definitely potential for retakes.  Shooter pulled off the shot like the old pro he was but this scene definitely made Bonnie glad of all that attention work that had been done with Shooter.

If you have never tried it before you might try giving your dog some commands that he or she is really solid on but instead of standing – try laying on your back on the floor, or kneeling, try giving the command from a few feet away slightly angled around a corner and you will see that at first your dog will be confused by these positioning twists.  Getting dogs used to giving focus in a variety of positions and at a distance is a staple in the Canine Co-Stars Training classes. Unlike an obedience trial where if your dog loses attention you may have a lower score or fail to earn a ribbon, retakes on the movie or television set can cost the production company thousands of dollars for every couple of minutes!  It pays to be prepared.