Home/Training/In Praise of Food
Previous Next 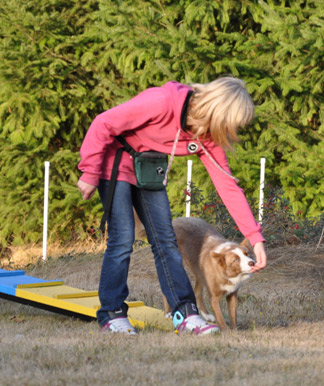 I am still surprised, in today’s motivational dog training climate, when I run into someone who adamantly believes training with food is just wrong. 30 odd years ago, back in the day when most trainers were popping and jerking their way around the ring that attitude was fairly common, but now?

When I asked why these people thought training with food is the dog-training equivalent of cheating on an exam I get a couple of standard answers:

Let’s explore these one by one starting with the belief, that if you  start training with food you will only have a dog that works when there is food. I most definitely use food. I use a lot of food when the dog is learning a behaviour. As the dog becomes increasingly stable on that behaviour food rewards are  gradually faded away until only the more spectacular instances of that behaviour are rewarded. For example, on a dog that is not a raw beginner I would seldom reward a sit with food, but once in a while if the sit was blazing fast and perfectly straight I might well give the dog a reward. Food is intended to facilitate the learning process and as a motivator to encourage the dog in both learning and work.

Isn’t training with food cheating? In certain situations – if you were in an obedience trial and were sneakily slipping your dog food out of your pocket while you were competing in the ring – that would most definitely be cheating. Most of the top obedience trainers in North America, train with food. Why? Because it works – using food motivation can create a happy engaged learner who enjoys working. By the time these trainers are ready to go into the obedience ring, food rewards have been faded away to let other motivators such as body posture and tone of voice give the needed reward allowing these dog/handler pairs to give amazing performances without food.

My dog should just naturally do what I want (without any need for praise or reward). I wonder how long this person would continue to go to work everyday without earning a paycheque? Even with paycheques, workers often choose to go to another job or slack off  if they feel unappreciated. Why would your dog be any different?  Part of being a good dog trainer is knowing when to pay and even when to give a bonus.

Your dog should just “naturally” do what you want?  Actually nothing is more natural than rewarding with food. The domestication of the dog came about in the first place by dogs choosing to hang around human settlements looking for – you guessed it – FOOD. 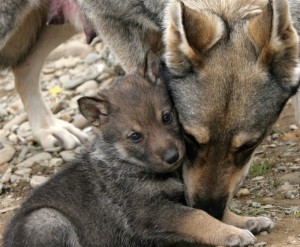 Wolf and coyote mothers instinctively use food to train their puppies. When mom wants the puppies to start venturing out of the den she will regurgitate the food she brought back from the hunt closer and closer to the den mouth and will eventually only let the puppies nurse from her when they are outside the den. Using food she lures the pups to follow her out of the den. When she wants them to start to hunt she brings food to the top of the den first by regurgitating food, then by dropping a kill, as they progress she will bring the kill & drag it for the pups to follow. In the final stages of this training she will bring a small or injured animal for the pups to learn how to track, chase and  kill.

The common theme here is that when mom requires a specific action she lures the pups with food to achieve it and then rewards by giving them food once she gets the response she wants.

Tips on Training with Food

Hopefully, I have convinced you that rewarding with food is a natural and  useful tool in your training toolkit. When using food there are a couple things you should keep in mind.

When to reward ( and when not to ) 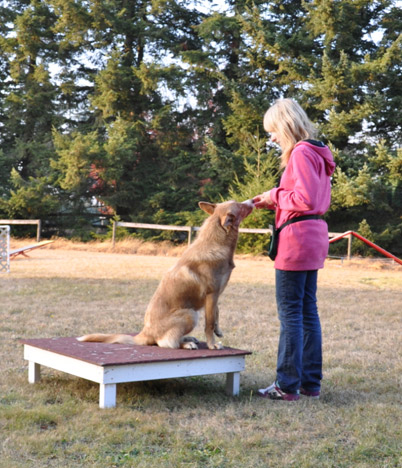 Timing is everything! The goal is to reward at exactly the right moment so that the dog clearly understands what it is being rewarded for.

For example, you ask your dog to look at you, and he does but  just as you were going to reward him, he looked away. You would need to stop yourself from rewarding at that point because you would be actually rewarding the dog for the wrong behaviour (looking away).  Another example, if your dog is shy or nervous and makes a gesture to meet someone, have they person feed your dog or you offer food while the dog is still moving forward to greet the person. If you fumble with your food and now the dog has moved back to beside you or behind you and then you feed it  you are rewarding  the dog for hiding behind you.

If your dog is whinning and you pet it or acknowledge it perhaps telling him/ her “it’s OK” and then feed it you are rewarding it for whining Even the fact that you make eye contact gives the dog reward for poor behaviour. I try to ignore all undesired behaviour instead setting the dog up in to situations where I get the opportunity to reward it for doing the right thing.  Using whining as an example – make sure to praise and reward the dog when it is laying quietly not whining.

This is where people who don’t believe in using food usually go wrong they think that if I teach my dog to sit using food they will need to use food every time they ask the dog to sit – not so! While we are actually training a dog to perform a behaviour we will lure them into position using food. Once the dog knows the behaviour the food is offered less and less frequently and a lower value food is used or other rewards such as praise or petting.

When to really reward

If your dog is learning something and starting to offer up the new behaviour reward with a better pay. If your dog is struggling to learn something but suddenly hits on the right action then give the best reward you have to offer! Build excitement – make it a jackpot!

A Note on Jackpots

In the 1960’s ground-breaking animal behaviorist BF Skinner did a series of experiments using food rewards with rats. In one study the rats were placed in a cage with a lever that when pushed released a food treat. In one set of cages, every time the rats pushed the lever they were rewarded with food. In another set of cages the food reward was random, so the rat might push the lever 2 times or 6 times before getting a treat.

The interesting part of this experiment is what happened when they stopped rewarding for pushing the lever. The rats that received food rewards every time tried pushing the lever a couple times and then stopped. The rats that were rewarded randomly continued to push the lever for a long time always hopeful that this would be the time that a treat would be dispensed. This is called the Jackpot effect. You can see the applications the jackpot effect  has to dog training and … gambling. If your dog gives a spectacular performance of a certain behaviour and you give him a jackpot in reward he will keep trying to offer up that behaviour even if the rewards are intermittent. Unfortunately the also gives us clues on why some people get hooked on slot machines.

As an Animal Coordinator /Trainer for the film industry my job is to source dogs for various film projects and train the behaviours they need to perform in front of the camera. But… the action/behaviour/trick that the dog performs is only part of the performance. Just as important is the dog’s demeanor and personality. On screen, are  the dog’s ears up, is his tail wagging are his eyes sparkling with mischief. In the obedience ring a competitor could get a high score with a dog stressed by compulsion, working nervously with his shoulders slightly hunched and tail down but for the film industry that would just be a waste of film. I choose to use motivational methods including food rewards so that the dogs I train work happy and enjoy working and have that sparkle when they are set.