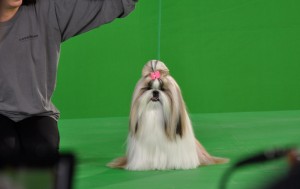 For this Time Warner commercial the production company requested “Best in Show” looking dogs in long coat. We loved working with another generation of Debra Long’s Shih Tsu’s – we had used her “Magic” in previous commercials and up and coming star, Spencer proved to be just as much a professional. Thanks Debra for being so much fun to work with and doing such a great job. Lots of grooming went in to Spencer looking so amazing.

To show how capricious casting can be – they were originally looking for a Yorkie / Pekinese / Shih Tsu and were wowed by Spencer’s casting pic because of the personality (and pink bow) but for the other dog they ended picking our imported Briard – Multi European Ch. Rafaela Chic Moravia Campanella – definitely lots of coat there but not a little dog . 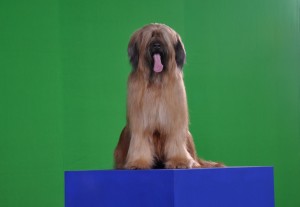 This was a really a quick shoot the dogs were working against a green screen. Primarily the shot was the dogs posing with various props. In post production they will edit out the green screen and replace it with some sort of fancy background. The grooming to prepare the dogs for their big closeups actually took longer than the shot itself.

I have included some photos from set. For those people working at getting their dogs ready for film work I would draw your attention especially to how much equipment and other chaos you have to get your dog ready to work around. It is really important as your dog progresses through training to work in different places and get your dog used to people and equipment moving around them. Expose them to various noises so they will be able to recover quickly if loud equipment stars up (often there is construction going on as the production builds other sets) or if someone knocks over a lighting screen. It is also good to proof your dog around food. Some camera crews don’t realize that leaving a meat sandwich close to where the dog is working can be distracting for the dog. 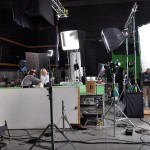 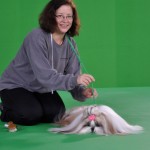 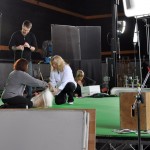 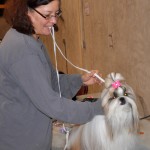 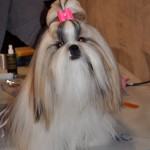