I was lucky enough to spend the day with my daughter and her dog Raz recently while shooting a Sudden Link commercial. After waiting around all day to shoot our one shot, it was finally our turn! Its always a little nerve racking when the dog is the last shot of the day because everyone is tired and just wants to go home. Raz came in like a little pro going to his mark when told and then lying down with his head down, each time he spoke when asked to.

This sounds easy but can be hard for even the best trained dog to keep their head down while a ton of things are going on all around him. In this shot Raz had to deal with people taking light readings right next to his face, having the guy with the clapper come in, having the sound guy moving a  boom over his head and  the camera dollying in and out, not to mention and all sorts of people are running around yelling directions to other people!  Trish has done such a nice job with this dog, he loves to work and is seemingly fearless on set. Raz is really getting a reputation for being a one shot wonder.

I took some video and pictures so I could illustrate how busy, chaotic and cramped a set can be. For people preparing their animals for movie work the more that you can get your dog used to noise and movement the better off you are. 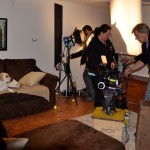 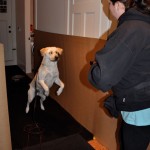 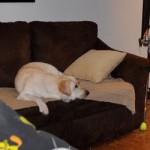