k9 Co-Stars get Spooky on Set with Supernatural

k9 Co-Stars get Spooky on Set with Supernatural 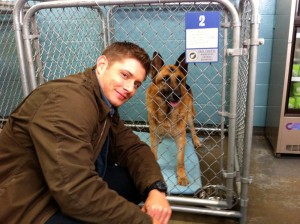 In the episode “All Dogs Go To Heaven” a bunch of the Canine Costars roster got a chance to strut their stuff. Gage, the  German Shepherd pictured above with actor Jensen Ackles, was the lead dog playing a weredog instead of a werewolf. As Gage is an older canine gentleman he was backed up for the action shots by doubles Ule owned by Karen Sinclair,Lasco owned by Guy, with aggressive barking by Gus owned by Julie Wilson. Gage is owned and loved by Canine Costar trainer Lynne Lachance.

In addition to the lead role there were several bit parts. Other canine lycanthropes were played by Doberman, Larkin, owned by Maria Graham, and Tundra and Snapper, two wolf-hybrids that call Canine Costars home. We also provided a few background dogs for the kennel scene including Ruckus the Briard, Scrabble the Border Terrier, Digit a Border Collie and Speedo an English Bulldog. 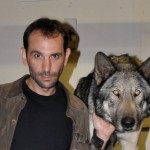 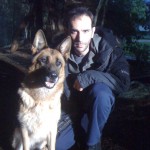 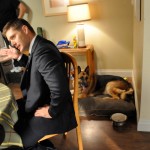 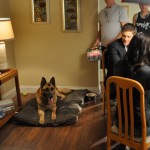