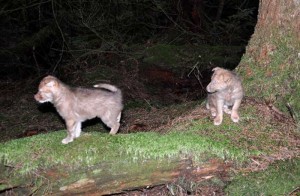 Next post will feature Pyro the Pitbull’s day on location.

As an Animal Coordinator for movies and television I am often asked to provide wild or wild looking animals for films and television. In a recent day on set Canine Costars provided a couple of young coydogs (coyote / dog hybrid) for the up coming feature “Red Machine”. Such hybrids are often chosen because while they look like their wild progenitors they have the work-ability and more solid temperament of the canine side of their ancestry. 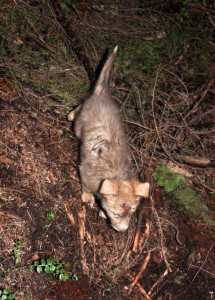 These chunky puppies had a great day on set being fussed over by both cast and crew and got to film their scene in a forested area in the Seymour Demonstration Forest. One of the things we note about this rare litter of coydogs is that they are far more coordinated then canine pups of the same age. They are extremely intelligent and even at this young age already know and can perform many trained behaviours on cue. 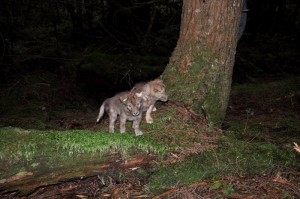 In the pictures they look a little dirty – this was actually a gel makeup to make them look more “wild” . For playing a wild animal being a bit scrawnier and having a less plush coat would have helped sell the wild animal part. Unfortunately – we had to scruffy them up using make-up because these puppies were solid, round and plushy looking. These puppies were  raised on  Chow for Now natural dog food.